Come see me hit the boards as LADY CAPULET 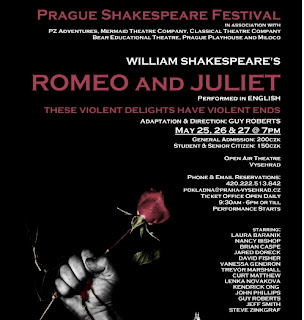 ROMEO AND JULIET May 25, 26 & 27 @ 19:00
Open-Air Theatre, Vysehrad – Prague
Prague Shakespeare Festival, Prague’s only professional English-language classical theatre company, is pleased to announce the limited engagement of a new production of William Shakespeare’s ROMEO AND JULIET by PSF Artistic Director Guy Roberts at the Open-Air Theater in Vysehrad May 25-27, 2010 at 19:00.
One of the most beloved plays of all time, Shakespeare’s masterpiece Romeo & Juliet is the premiere PSF summer production on the outdoor, open-air stage at Vysehrad, signaling a new annual tradition of “Shakespeare at the other castle” in Prague.
Roberts states, “Romeo and Juliet is clearly the greatest love story of all time. The question to me seems to be how to retain the beauty and romance associated with our expectations of the play, while still making the language and story accessible to a modern audience? We don’t want to feel as if we are watching a piece of museum-theatre. By securing Romeo and Juliet in the past we are also distancing ourselves from the action of the play and allowing ourselves the freedom not to be transfigured by it. I think it is impossible to do a “period play.” Plays can only occur in today’s imagination – and that is where our play takes place. Shakespeare’s Verona is not unlike our Prague today. It is a world that bridges the ancient and the modern-a world that is refreshingly relevant. At the center of the entire play is love – the kind of life-changing, soul-transforming love that we all dream of but perhaps never believe we will really find.”
Fueled by the intense passions and moving poetry that the world has cherished for years, the play is presented in English under the direction of PSF Artistic Director Guy Roberts (who also appears as Mercutio) with a multi-cultural international company of artists: the titles roles will be performed by Lenka Novakova and Kendrick Ong. Returning to the stage, Emmy-nominated Casting Director Nancy Bishop (former Artistic Director of Black Box, Prague’s original English language theatre) is joined by Prague favorites Laura Baranik, Brian Caspe (Artistic Director Prague Playhouse), David Fisher (Artistic Director, Bear Educational Theatre), Vanessa Gendron (co-Artistic Director, Miloco), Curt Matthew, John Poston and Jeff Smith (co-Artistic Director, Miloco)among others. From the United States, Steve Zinkgraf co-stars as Lord Capulet.  The production features costume designs by Tatiana Evonuk, scenic design by Ivana Nikolic and an original score by Ed Kliman. Amy Huck is the production stage manager and movement coach.  Sidney Berger, Artistic Director of the Houston Shakespeare Festival, is the verse coach and Anezka Novak is the voice coach.
PRAGUE SHAKESPEARE FESTIVAL
in association with
PZ Adventures, Mermaid Theatre Company, Classical Theatre Company (USA)
Prague Playhouse, Bear Educational Theatre & Miloco (Czech Republic)
presents
THE WORLD PREMIERE of a new production of
ROMEO AND JULIET
by
WILLIAM SHAKESPEARE
ADAPTED & DIRECTED BY GUY ROBERTS
DATES:
May 25, 26 & 27
CURTAIN TIME:
19:00
LOCATION:
Open-Air Theatre, Vysehrad
TICKETS:
200kc General Admission,
150kc Student/Senior
RESERVATIONS:
pokladna@praha-vysehrad.cz
222.513.842 phone
ABOUT THE PRAGUE SHAKESPEARE FESTIVAL
The Prague Shakespeare Festival presents an annual celebration of professional theatre productions, workshops, classes, lectures and other theatrical events, of the highest quality, conducted primarily in English by a multinational ensemble of professional theatre artists, with an emphasis on the plays of William Shakespeare, bringing to the Czech Republic, European and World audiences classical performances that are fresh, bold, imaginative, thought-provoking, and eminently accessible, connecting the truths of the past with the challenges and possibilities of today.
For interviews & more information about PSF and ROMEO AND JULIET contact
Guy Roberts
Artistic Director
Prague Shakespeare Festival
guy@pragueshakespeare.cz
Next Post