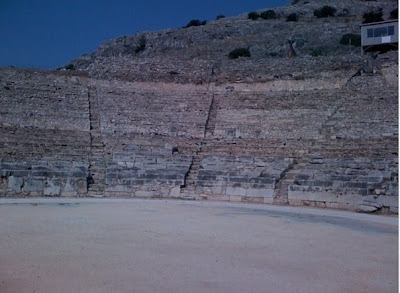 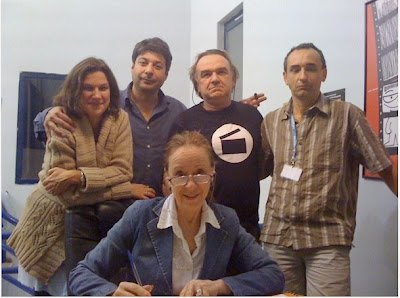 It was such a pleasure to serve on the Drama International Short Film Festival jury in Drama, Greece. I was treated very well and had a wonderful team to serve with on the jury. Here pictured (in a not very good iPhone photo) is me with VASSILIS MAZOMENOS (film director from Greece,) JACQUES MITCH (Film Director, France), GERALD WEBBER (Distributor, and curator, Austria) and MANUELA CERNAT, (Film Professor, and cultural ambassador Romania)

We selected Kavi for the Gran Prix Winner, directed by the young and promising Gregg Helvey of USC.
Second Prize went to A Long Way Home, by Anamaria Chioveanu of Romania. The performances by two girls lost in Bucherest were fantastic.
The Best South- Eastern European Award went to Lullaby, about sex traffic in Cyprus, directed by Yianna Americanou
The Special Award of the Ministry of Macedonia-Thrace went to a one shot film called I Hear Your Scream, by Pablo Lamar of Paraguay. He should also be commended for his direction of the ducks in his shot.
The EFA Award went to Dutch film, Goodnight, about a single father, by Rosier Valery.
Since we wanted to award a fun film, we also chose the offbeat Swedish comedy, Seeds of the Fall, by Patrik Eklund for an honorary mention.
There were lots of good animation films, and we chose Rojo Red, by Columbian director, Juan Manuel Betancourt.
The best acting mention went to Polish actor Radomir Respondek in Echo.
I also particularly like the animated film, The Sylphid by Danish Dorte Bengston. It was a mythic story about mother and daughter.
I also really like another mother/daughter film called Missing by Dutch director Jochem De Vries.
Next Post