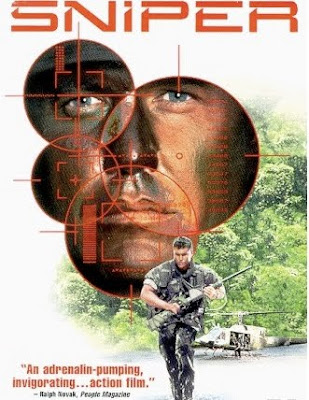 “SNIPER: RELOADED” is the fourth installment of the ‘Sniper’ franchise.

US Marine Sergeant BRANDON BECKETT (mid 20’s), son of legendary Marine sniper Thomas Beckett (portrayed by Tom Berenger in Sniper 1-3), is stationed in Zimbala, Africa, on a peace keeping mission working closely with the UN. German UN base commander, HANS JAEGAR (50) sends Brandon and his squad into the neighboring war ravaged Democratic Republic of the Congo to extricate the last remaining plantation owner, Belgian JEAN VAN BRUNT (55). On the mission, however, Brandon and his squad are met with fierce enemy fire from a hostile SNIPER, who manages to kill all of them except Brandon and Van Brunt’s daughter KELLI (14). A wounded Brandon and Kelli together make their way back to the UN base with the help of local big game hunter, former mercenary and friend of VAN BRUNT’s–MARTIN CHANDLER (50s).

While recovering back at the base, the wounded Brandon gets a surprise visit from an old friend of his father, RICHARD MILLER (50), whom he hasn’t seen or heard from since he was 12 years old. MILLER wants to get him back home and out of trouble. But Brandon doesn’t want any help. He wants to find the assailant, swears to take revenge against those who set him up.

Base Commander JAEGAR isn’t interested in tracking down the enemy sniper. Instead, he issues orders to pull all travel permits into the DRC, preparing to retreat from the area. Even attractive British Intelligence Officer ELLEN ABRAMOWITZ (late 20’s) can’t offer any help. Brandon decides he must find out on his own. Seeing his determination, MILLER teaches Brandon some sniping tricks before the young sergeant secretly leaves the base. Together with CHANDLER, the hunter whose help he seeks, BECKETT makes his way deep into rebel territory. But just when they seem to be making some head way, they’re met with a big surprise…

late 20’s, British/European, Lieutenant, U.N. Military Intelligence officer, grew up in an Army family, she’s beauty and brains combined, a woman with class. Working on the U.N. base in Zimbala, Africa, she helps Brandon Beckett (the lead) in his task of tracking down a hostile sniper in the war ravaged Democratic Republic of the Congo. During their joint effort, Ellen and Brandon become romantically involved. Ellen eventually even sets foot into the DRC stepping onto the battlefield herself…

50, German, Colonel, U.N. base commander, cruelly handsome, and morally corrupt. The commander of the U.N. base in Zimbala, Africa, HANS JAEGAR has come under considerable pressure when dealing with local armies and splinter rebel groups in the neighboring Democratic Republic of the Congo. But Jaegar also faces a challenge of his own: having been involved in illegal arms deals with the rebels he is now trying to get rid of any tracks that might lead back to him…

14, Belgian, cute, spunky, unafraid. When her father, plantation owner and arms dealer Jean Van Brunt, gets killed in a sniper ambush, his courageous daughter KELLI VAN BRUNT survives, and gets picked up by US Marine Brandon Beckett. Together, Brandon and Kelli make their way towards safety across the border and back to the U.N. base. Trekking through war ridden Democratic Republic of the Congo, Kelli betrays information about her father to Brandon – information that ultimately helps Brandon track down the hostile sniper.