UPCOMING EVENTS, LAUNCH OF SECRETS FROM THE CASTING COUCH 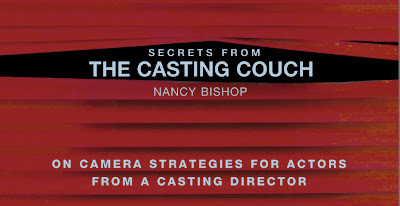 Edinburgh, CASTING SYMPOSIUM; FROM FRINGE TO THE SILVER SCREEN

Listen to leading casting directors, agents and promoters discuss the differences between casting in Film and Theatre, and how can actors branch out from theatre to screen work. This two-hour symposium will begin with a moderated discussion followed by a question and answer session from the audience. Sponsored by Spotlight.

Tickets: £10, Seats are limited. To order tickets ahead, click here.

Edinburgh, 20 August: Book Signing and Party! Come for a glass of wine, say hi to Nancy and get a signed copy of Secrets from the Casting Couch for a discount.

Off the Page Book Festival, “An evening with Nancy Bishop,” presenting Secrets from the Casting Couch.

Secrets from the Casting Couch promotion seminars and signing.

2pm-3pm: Seminar: Strategies for online marketing: This one-hour seminar will focus on strategies for actors to promote themselves in an increasingly competitive market. Seminar is following by a book signing where you can purchase Secrets for a 20% discount.

Where: The Actors Centre.

Book sales: Buy Secrets from the Casting Couch for a 20% discount.

Nancy is joined by American film and TV Director Duane Clark. Discussion will focus on how directors and casting directors work together to cast a project. Clips will be shown from the new American/British TV series The Philanthropist, starring James Purefoy, on which Duane and Nancy collaborated.

Time: 4pm- 5pm, followed by a wine and cheese reception.

Secrets from the Casting Couch, BOOK LAUNCH AND PARTY!

Join us at the Globe Bookstore for a short panel discussion about casting and actors working in Prague. Author and casting director Nancy Bishop is joined by Czech actor, Pavel Kriz, who has worked on numerous international productions. Screen International journalist Theo Schwinke will moderate a discussion about casting, Prague actors and the Prague film scene. A book signing by the author and illustrator Bonnie Glover will follow.

I will be a jurist and lecture on the Talent Campus.

FROM FRINGE TO THE SILVER SCREEN

FROM FRINGE TO THE SILVER SCREEN