WOMEN IN FILM AND TV EVENT 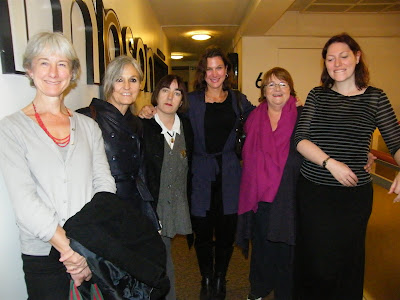 Thanks to the pros who helped me out at the CASTING COUCH Panel Discussion last month in London. Pictured here are: Pippa Cross (Producer), Sharman McDonald (Writer), Aisling Walsh (Director), Me, Ros Hubbard (CD) and Natalie Haynes (Journalist and Comedian.)

I hope to post the transcript from the event soon, where we discussed the lack of female roles in TV and Film (According to the Equity survey, there are two male roles for every female role.)
WFTV working with Skillset recently did a survey which was announced at the London Film Festival. The survey was of what successful women in film had in common. The items are:
1. STRONG FEMALES INFLUENCES IN THEIR LIVES
2. EARLY CREATIVE LEANING
3. PERSONAL CHARACTERISTICS: a passion for the chosen occupation, effective management of rejection,
4. ROLE MODELS AND MENTORS. Significant role models of women working in the field.
5. INDUSTRY EDUCATION AND TRAINING. Key to success is to seek out every possible training opportunity.
6. INDUSTRY CULTURE AND ATTITUDES. Older participants reported overt sexism in the industry, but not the younger ones.
7. NETWORKING
8 SUPPORT AND ENCOURAGEMENT; many participants grew up in predominantly female families or received single sex education.
Next Post